Welcome to Chris Words, and welcome to Week 32!

Well, I just arrived back home from The Indie 500, and what a fantastic event it was. Andy, Erik, Evan, Finn, Neville, and Peter wrote some pretty damn amazing puzzles, and the event was just a blast to attend. It was so great meeting these people really for the first time, and I got to shake hands and talk with so many other people that I greatly admire. And it’s not too bad solving at a table with both Matt Gaffney and Tony Orbach either.

In terms of how I did…I was no first place finisher. According to the amazing statistics kept at the event, I was 81st out of 100, or 41st out of 60 in my division. Not terrible, but I wish I was a faster solver.

The coordinators of the event issued the statement that the puzzles themselves should not be discussed for two weeks, which would give the at-home division a chance to play without spoilers. So, I’ll be back in two weeks to discuss my puzzle performances, and they’ll be something to read. Especially since I almost won the Best Wrong Answer award.

But speaking of awards, I did come home with some hardware! 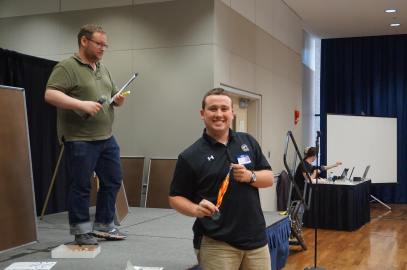 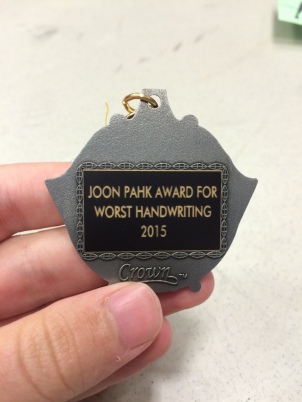 I won the award for Worst Handwriting, which was sponsored by joon pahk! I genuinely can’t believe I won, because I don’t think my crossword handwriting is that terrible. Next week I’ll scan a copy of my work and you can judge for yourself.

Even though joon sponsored the award, I think the people (and the award’s namesake) were expecting joon receive the medal. As seen on Twitter:

So, I have no choice but to make the pahk name proud and show that I did, in fact, have the worst handwriting deemed by the Indie 500 judges. More on that next week.

There is a new puzzle this week, and I hope you enjoy it. The inspiration comes from the fun I’ve had this last year, and the fun many indie constructors have had (or will have) as well.

But I did promise all of you some data mining, so let me show you what I’ve got.

I’ve collected all the clues and answers I have used for the 32 puzzles of this blog (including today’s).

They can be found here. (The actual list might be on a different sheet in the file).

Besides looking at the Ginsberg clue database, I now also have this open, so that I don’t repeat clues I’ve already written. I felt this was necessary after discovering both of my clues for IKEA feature lingonberry jam.

Feel free to look around and see what you find. And a few notes I’ve made:

-There are more than 2400 words clued. Don’t know how many unique words, as I don’t have that kind of spreadsheet capability. I say more than 2400 because I combined two part clues (“With 56-Across,…”, etc.) to appear as one word in the spreadsheet.

-The maximum number of times a word has appeared altogether is four times. In that Four Timers club is ADO, ADS, AMIR, ANN, ELI, ICE, IDO, and MEG.

-The five most common words seen in the Shortz-era of the New York Times that have NOT yet appeared in ChrisWords are ATE, OLE, ERR, ENE, and IRE.

-I’ve only had one compass direction (NNE) appear in the puzzles so far. That’s good. I thought I didn’t have any, but there was on in #9.

-The words NAE, OBI, GRAIL, IDOL, PERU, and KALI have all featured clues associating with the Indiana Jones franchise. So, it looks like I’m average an Indiana Jones reference once every five puzzles. This sounds about right to me.

-The word ATARI has appeared three times, and appeared in 3 out of 5 consecutive puzzles. Nothing really important there, just something I noticed in hindsight.

-Favorite clue? Lots of good ones, but I love the simplicity of [Words said before the band goes on?] = IDO. It felt good coming up with a new clue for that word that I hadn’t really seen anywhere else.

Take a look, and see what you find. If someone made a dictionary of just indie constructor clues, that’d be something I’d buy pretty quick.