Skip to content
HomeWell, I Started Dating a Witch the Week Before Halloween (#51)

Before I go into the meta, this week’s puzzle is my Halloween entry! And, to keep celebrating the season, feel free to flashback to last year’s Halloween puzzle.

This puzzle was looking for an appropriate eight-letter word that relates to this tribute puzzle.

As it should have been clear, the topic of this tribute puzzle is “Back To The Future”, which was in the news last week as 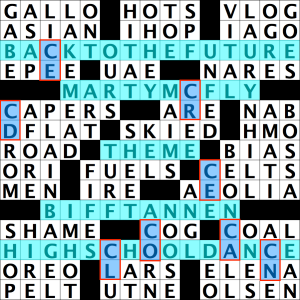 Also, the final theme entry to this puzzle was found in the dead center:
39A: [Important feature of a crossword puzzle or to a 58-Across] = THEME

So, of course the the theme to the crossword puzzle is BTTF, but the important part is finding the theme of the HIGH SCHOOL DANCE. As Doc would say, the “rhythmic ceremonial ritual” that got George and Lorraine back together was “Enchantment Under the Sea”.

That dance theme is now the important part of this crossword, as the name “Under the Sea” can be reworked as the pun “Under the C”.

As many of you saw, there are exactly 8 Cs found in this puzzle, and if you look “under the C”, the eight letters spell, from left-to-right, the name DELOREAN, the glorious car that Doc Brown turned into the time machine, and the answer to this meta puzzle.

Guys, last Wednesday was Back to the Future Day! And, it was my birthday! The fates aligned. To celebrate, I wore this shirt, which has my birthday on it.

And my birthday cake featured a design that made the day even better.

What a glorious day! Remember that USC Puzzle Hunt I talked about all those months ago? Well, the theme of this year’s Hunt involved a series of movies that should seem obvious at this point. Here’s the link for more evidence.

And, that let me cosplay as an important person in science history, during the opening kickoff. 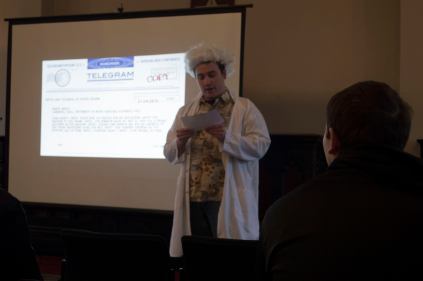 What a glorious day it was. Back to the Future Day has now come and gone, and it makes me kind of sad that the BTTF is now in a period piece. My intention for last week’s puzzle to be both a tribute puzzle and a meta puzzle, and I like to think I accomplished it. I hope I did the two Bobs proud.

So, 21 readers submitted “DeLorean”. Congrats to those who got it! This week’s randomly selected winner was Charles Montpetit. He will join Jon Delfin, John L. Wilson, Jim Quinlan, Eric Maddy, Andy Keller, David Cole, Roger Barkan, Patricia Miga, and Erik Agard in a future section of the site. Congrats Charles!

Finally, thanks to Ben Johnston for blogging about last week’s puzzle on the new New Grids on the Block website. Thanks Ben!

That’s all I got this week. The future is whatever you make it, so make it a good one.

2 thoughts on “Well, I Started Dating a Witch the Week Before Halloween (#51)”