Hey everyone, and welcome to Week 106!

Disclaimer for this week’s puzzle: Everything about it is a joke, and nothing about this puzzle should be taken as advice or endorsement. That being said, I hope you enjoy it. I think it’s hilarious.

We had a meta puzzle two weeks ago, so let’s go over the results:

The answer to this puzzle was a possible seventh theme answer that could be clued as “Popular candy bar (Boston)” while using the help of an MIT alumnus, and there was six starred answers, which are highlighted in MIT colors: 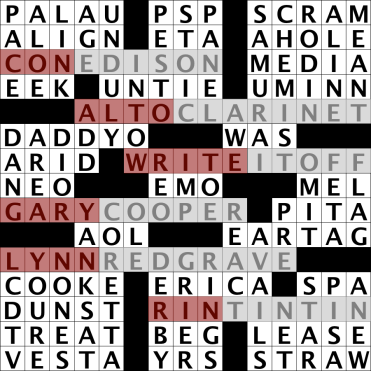 Hopefully Googling a few of these locations would lead you to the right answer, especially since Mill Run, PA would take you to the Wright answer: Each of these answer phrases begin with the homophone of a surname of a famous architect, while the city is home to maybe their most famous work:

So, looking for a seventh entry, which fits the bill. By far, the most famous architect to ever graduate from MIT, and certainly in the top architects of all time, is I. M. Pei, who is the designer of Boston’s John F. Kennedy Library, the John Hancock Tower, and MIT’s Green Building. So, the candy bar that begins with name is PAYDAY, which is our answer. By the way, Building 7 is an MIT building which is shown in the cover of last week’s post.

A few of our submitters tried the candy bar AERO as a potential correct answer, which is heartbreakingly close. While AERO is a homophone of EERO, Mr. Saarinen who designed the Gateway Arch, (1) This involves a first name while the other theme entries used last names and (2) Eero Saarinen did not graduate from MIT. While he did design the Kresge Auditorium at MIT which I attended twice last weekend, he did not receive a degree from it. Sorry for those who came close, but you were SO on the right track.

Enjoy the puzzle everyone! Be safe out there!